Met Gala returns to first Monday in May with gilded extravagance: Inside the carpet, after party 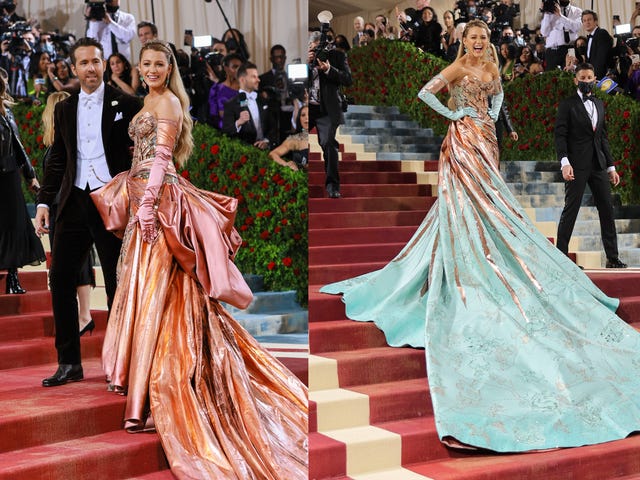 NEW YORK — For the first time since 2019, the Met Gala returned to its traditional home on the first Monday in May. Celebrity attendees brought true glamour — and it was a gilded affair if ever there was one.

After a pandemic cancellation in 2020 and a postponement to September last year, the full scope of the red carpet returned as a seemingly endless stream of stars, from Kim Kardashian and Pete Davidson to Blake Lively and Ryan Reynolds, posed for the cameras before trekking up the famed steps of the Metropolitan Museum of Art.

In line with the theme "In America: An Anthology of Fashion," the invite-only event's white-tie dress code was "gilded glamour," a reference to the Gilded Age in the late 1800s. And while attendees based their fashionable interpretations on the era's gold and wealth, another definition of "gilded" — one that focuses on false brilliance and a fanciful exterior hiding a lackluster reality  — also informed the night.

After a weekend of sunshine, the gala was set against dreary and rainy weather, but that didn't stop the stars from stepping out in their finest on a Monday evening for fashion's biggest night. And from our vantage point on the Met steps, the fashion elite evoked feelings of grandeur that momentarily stopped time.

Under a large, tented red carpet, the star-studded event was briefly shielded from the realities of American life, as news of a leaked draft of an opinion from the U.S. Supreme Court on the verge of overturning Roe v. Wade coincided with the snaps of camera lenses and the cheers of fans lined up outside the entrance on Fifth Avenue.

The annual benefit, the backdrop for the latest fashionable and historical display at the Metropolitan Museum of Art's Costume Institute, is always a glitzy spectacle, this year leaning more into the old American glamour.

What really happens on the Met Gala red carpet

On the jam-packed carpet, which went on for more than three hours, members of the press lined both sides of the grand steps leading up to the museum's entrance, which led to a lavish dinner party for invited guests. The limited list, one of the hottest tickets in town, is approved by Vogue editor-in-chief and honorary Met Gala co-chair Anna Wintour, and tickets for a table can cost upwards of $200,000.

The first stars to make their way up the carpet Monday were Vanessa Hudgens and LaLa Anthony, who (along with Vogue global editor at large Hamish Bowles) co-hosted Vogue's livestream. Wintour wasn't far behind, her arrival signaling the official start of the steady cascade of celebrities decked out in gilded glam.

As one of the evening's co-chairs, Lively aced the carpet with an expert understanding of the theme: Her quick-change gown served as a tribute to New York City, courtesy of Versace.

Other highlights included Billie Eilish, looking as though she just emerged from her sitting room in 1890 to throw a raucous party; Janelle Monáe, glittering in a headpiece and gown from Ralph Lauren; Kerry Washington in Tory Burch; Cardi B, golden in Versace; Bad Bunny, donning an updo and a Burberry ensemble; Lizzo, whose gilded flute was more than just an accessory (she played a tune for reporters); co-chair Lin-Manuel Miranda; Kid Cudi in a stunning royal blue cape; and Rosalia in a corseted Givenchy gown.

While many view fashion as simply frivolity – and there tends to be a true excess of the frivolous at the ball – it continues to serve as an important marker in history. The Costume Institute (and the film directors tapped to design parts of the exhibit) tried to highlight that historical context with stories of unsung heroes, particularly women and people of color, in American fashion. The Met Gala and its 2022 theme also provided a stage to recall historical fashion moments and bring them into the current day with new, history-making ensembles.

Beyond the clothes, the carpet featured unseen moments among the guests.

Reynolds looked lovingly down the steps at his wife as she posed for the cameras. Fellow celeb couple Alicia Keys and Swizz Beatz shared a cozy embrace at the top of the steps, while Kourtney Kardashian waved to onlookers as she held hands with Travis Barker.

Cynthia Erivo greeted Met Gala veteran Sarah Jessica Parker, who had laryngitis, she told reporters as she hustled up the steps in her voluminous Christopher John Rodgers gown. Valentino designer Pier Paolo Piccioli adjusted Glenn Close's hot pink look before she stepped in front of the camera for the Vogue livestream.

Jimmy Fallon convened with Corey Gamble, Giveon and Kid Cudi, shaking hands and exchanging hugs. When Lizzo spotted Kim Kardashian, she let out a gasp and declared how good the star looked in her gold gown.

Kardashian and Davidson made their Met Gala red carpet debut as a couple, with the reality star and businesswoman draped in the same skin-tight gown Marilyn Monroe donned sing "Happy Birthday" to former President John F. Kennedy, marking nearly 60 years to the day.

All of Kardashian's sisters came together on the carpet ahead of her arrival, with mom Kris Jenner and her beau Gamble holding court as they waited for everyone to ascend. Kourtney and Khloe Kardashian stood side by side with sisters Kylie and Kendall Jenner, their unity visually echoing the sentiment they avow in their new Hulu reality series: "Never go against the family."

Many celebrities get carpet ready at the nearby Carlyle or Mark hotels, just blocks away from the Met — and close to some of the afterparties.

An Instagram-hosted afterparty at the James B. Duke House featured a DJ set from Anderson .Paak and performance from SZA. Playboy and Cardi B hosted an afterparty at the Boom Boom Room in the Meatpacking District, with guests including Eilish, Awkwafina, Sebastian Stan, Donatella Versace and more

In midtown, designer LaQuan Smith hosted another one of the night's few afterparties, decking out Peak at Hudson Yards. Although the start time was officially 11 p.m., guests flowed in for several hours (it is the city that never sleeps, after all). Celebrities at the soiree included Teyana Taylor, Saucy Santana, LaLa Anthony and Billy Porter; each had their own VIP area inside the crowded venue.

Guests were ushered up to the 101st floor for a post-gala shindig, complete with a not-yet-released type of Popeye's chicken sandwich (both Taylor and Santana were spotted indulging in the late-night bite) and signature Remy Martin cognac drinks flowed. Pairs of Smith's slippers and brightly-colored sunglasses were available at $1 a pop in quasi-vending machines for partygoers to grab and wear.